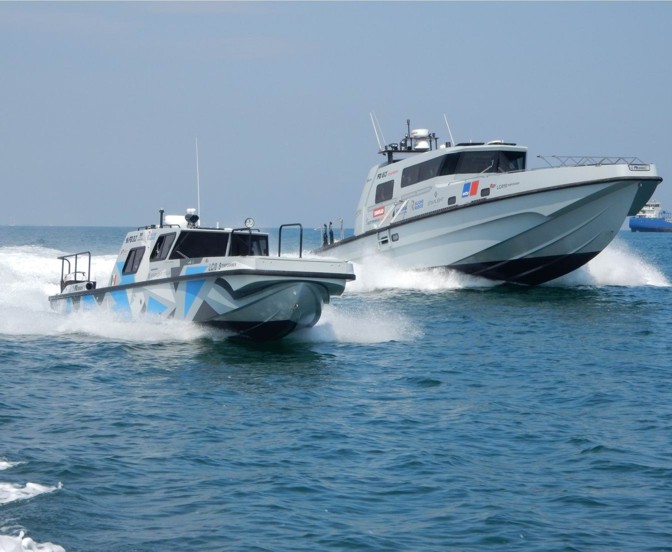 On Tuesday, July 12, 2016, the Fabio Buzzi crew, composed by Mario Invernizzi, Antonio Binda, Eric Hoorn, Stefano Gibelli, has succeeded in setting the Montecarlo – Roccella Jonica – Venice record , with a time of 22 hours 5 minutes and 42 seconds, by lowering the primacy of 7 minutes and 35 seconds, maintaining an average of 52.3 knots (97 km / h.). The previous record was 22 hours 13 minutes and 17 seconds, set by Mario Invernizzi in September 2011 with the “Kerakoll” racing boat. The vessel used for the new record attempt, is an FB60 (a 18 mt, designed for rescue operations and maritime control powered by two MTU engines of 1600 hp) produced by the FB Design shipyard. On the same route and on the same day, another FB Design hull, the small FB 32, piloted by Roberto Rizzo and Vincenzo Tota, manned Marco and Carlo Tassara Menoni, powered by  2 VM engines of 350 hp, has started from Monte Carlo and he’s arrived in Venice after 32 hours 46 minutes and 15 seconds, thus establishing the new record in the junior class (up to 9 meters) with an average of 35.26 knots (65.38 km / h). It is particularly worthy of note the fact that both these hulls have not been studied as for racing boats, but hulls intended for military use and products from FB Design for various military navy in the world, thus demonstrating, the absolute superiority of the Italian product in the professional fast boats industry.

For these two primates, as for the previous ones, they’ve  been used  the propellers for surface transmissions drives designed and produced by Eliche Radice. These propellers are destined  in equipping the surface drive transmissions of high-speed boats, and they combine a high hydrodynamic efficiency with the structural strength required for this type of applications. As mentioned, the design and the production are entirely performed internally at Eliche Radice and also the alloy used for the casting, is an Eliche Radice formulation, registered and approved by the major naval registers in the world. The workmanship of these propellers, it’s carried out with CNC machines to absolutely guarantee the compliance with the thigt tolerances required by the working class “S”.